Lost in Translation or was that Transition?

Many have seen the 2003 film Lost in Translation featuring aging actor (Bill Murray) and recent college-graduate (Scarlett Johansson). The two develop a unique friendship after a chance meeting in a Tokyo hotel. The movie explores themes of loneliness, alienation, insomnia, and culture shock against the backdrop of modern Japan. (Thanks Wikepedia)

Many more of us have felt ‘lost in the translation’ of life.

I for one, admit to have on several occasions felt as if I’d lost myself amidst the hustle and bustle of life. Sure, I was moving ahead but WHY? And WHAT for?

Most of us can relate to feeling lost in times of transitions and change. And most of us can also relate to times in our lives when we’ve questioned our purpose and the meaning of our life and our daily efforts.

On Sunday I listened to Scott Harrison of Charity Water explain how after 10 years of nightclub promoting he came to a place where he felt lost, spiritually bankrupt. A real ‘threat’ to his life brought Scott face to face with the fact he was miserable. Although his life was full of people, fun, money and indulgence it was missing meaning and purpose. The life he’d worked so hard to create no longer fit him. Alienated, he committed himself to a 180 degree LIFE change. Suddenly he was clear, he wanted a life that was exactly the opposite of what he had created. And so began an adventure that led to a life that translated for him, a life of purpose and meaning. A life that translates is a life that fits. It’s a life that you can believe in, value and represents your truest self. It’s a life that is meaningful and purposeful.

Sometimes the jobs, relationships, goals, passions and visions we invest ourselves in lead us down roads lined with alienation and loneliness. Sometimes what is; is not, what we planned.

Sometimes we find that we are lost, we can’t make sense of how we fit into the world we created, we can’t translate the life we are living, the person we’ve become.

Yesterday, I was on the phone with a woman who is not only an incredible friend of mine but also an incredible mother and a rocking professional . Poised on the verge of several major life changes she mused, “Somehow I got lost in the translation, in trying to make a living, being a mom and everything else.”

It’s strange to feel lonely when surrounded by people and opportunities, stranger even to wake up and find that the path you’ve taken has led you to feeling alienated in your own life. It’s a sign. It’s a sign you’re at an intersection, one that you may want to proceed from very intently and deliberately.

Take heart. We’ve all felt ‘lost in translation,’ it’s part of being human.

Now the question is; what do you want to do about it?

Here’s a few things I think about when I find myself lost in translation and transition. What are your thoughts?

Photo Above Uploaded on January 13, 2010
by Running Wolves 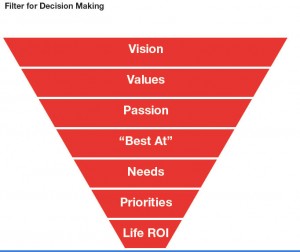